How to Make a Motorbike From a Chainsaw 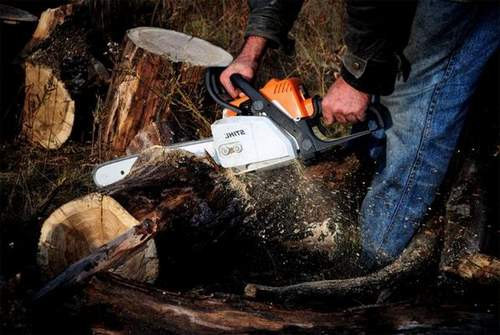 At the heart of almost any homemade chainsaw is its use as a universal drive that can be used for a huge number of different devices. The scope of their use is very wide: cutting stone and metal, pumping out water, removing snow, drilling wells and holes, riding, moving various objects, swimming and even flying.

Realize the potential of a chainsaw with a variety of devices and accessories. Any alteration is based on the simple principle of engine power take-off: the device necessary for the master is connected to the output shaft. The presence of a powerful motor, compact size and relatively light weight of this tool, autonomy and the ability to work in almost extreme conditions make its capabilities truly limitless. Of practical importance is the practical design of the clutch, which protects the nodes and systems of the saw from breakage and overload. A tool made of a chainsaw is notable for its tightness, so it can be used in almost any position.

What can be made from a chainsaw

All homemade products can be divided into 2 groups:

The most simple homemade chainsaw

Below are the various options for devices made from chainsaws. Everyone can use such ideas in their household. From a chainsaw with a small amount of additional materials, you can make:

Angle Grinder. The main system of such a device is a bearing assembly with a shaft. At one end, a driven pulley is mounted, which rotates with a V-belt. On the other, a mandrel for cutting wheels is fixed. Depending on their brand, such an angle grinder can cut stone, metal, brick and other building materials.

See also  How to saw with an electric chainsaw. How to use a chainsaw and a chain saw. Getting ready to work, assembling, running in. Tips and tricks

Ice drill. For good operation of the device, the screw speed should not be large, so it is necessary to use a gearbox made in the form of a worm or V-belt drive. Such a device can be used in the construction of a foundation from screw piles and for other earthworks.

Water pump can be used for watering the garden, emergency water supply, drainage of ponds or flooded basements. Such a nozzle is a simple centrifugal pump equipped with a bracket for attaching to a saw and a pulley that drives the pump turbines.

Winch, which uses a chainsaw drive. The pulling force of such a device directly depends on the power of the saw motor. When using an additional unit, it can be significantly increased. This device is equipped with such additional parts as a tap block, hooks, belts, anchors.

Chainsaw Outboard Motor. A great alternative to buying an expensive engine. To ensure movement of 20 km / h, it is enough to install a homemade outboard motor with a gearbox (gear ratio 2: 1) and a 3-blade propeller, 210 mm in diameter. At the same time, fuel consumption will be only 1 liter per hour of engine operation.

Motor cultivator almost anyone can assemble from a chainsaw. To do this, you need a transmission system (2 gears). With its help, the energy of the motor is transmitted to the drive wheel, thanks to which the working mechanism is set in motion. Of course, such a cultivator is unsuitable for processing a huge field, but its power is quite enough for a personal plot.

For the manufacture of the following devices, the master needs some technical knowledge and experience with various mechanisms and materials. Using various components, you can create such homemade products from a chainsaw:

Chainsaw sawmill, which can be done with a metal frame. A chainsaw is firmly attached to this frame. Workpieces can be guided along the track. There are other options for sawmills. So for a device designed for longitudinal sawing, you will need an adapter attached to the tire located at its base and a guide that sets the direction of movement of the adapter. The guide is mounted on a board attached to the sawn log. With the help of such a sawmill, logs can be divided into 2-4 parts.

Portable Chainsaw Power Station It is able to provide energy in any places far from electric networks. To create it, you need such components: gear reducer, generator, metal strip, drive belt, control panel. Powerful saws Druzhba and Ural are most suitable for such a device.

Homemade snow blower can be made from a saw whose power exceeds 3 kW. For it, it is necessary to mount a screw assembly with blades of a durable, but elastic material. The motor chain is connected to the screw assembly through a pair of gears. You can attach both wheels and skids to the snow blower. To throw snow, you can use any pipe of large diameter.

Homemade snowmobile from a chainsaw the design is a bit more complicated than the sawmill. The snowmobile consists of a frame, engine, caterpillar and steering. He also needs skids for movement. To create it on the steering wheel, you need to make gas and clutch. You should also consider the shock-absorbing suspension system of the carrier frame. Since the chainsaw does not have a transmission, the clutch on a makeshift snowmobile is centrifugal. A multi-ribbed belt and chain are also used. For the steering mechanism, you can use the details of an old bicycle. It is redone so that the central axis moves the traction ski skis. To enhance traction, a traction gear is installed on the drive shaft of the track. Engine power should be at least 5 hp

Chainsaw aerosleds make it a lot easier than a snowmobile. A large propeller, rotated directly by the chainsaw engine, communicates the driving force. A serious limitation on the use of such snowmobiles due to their insufficient patency is the small power of the chainsaw engine. For trips through snowy fields, an engine with a power of at least 12 hp is required.

Chainsaw Knapsack Helicopter. Such an aircraft can fly into the air only when at least four engines with a total power of 20 hp and operating in a coordinated mode are used in its design. Make it out of one chainsaw does not work. Using such a homemade device can be life threatening.

Chain Forged Knife can do people familiar with blacksmithing. For this, first of all, the old chains are divided into pieces, which are then welded into blanks. They are heated in the crucible to 850 ° C. The blanks are pressed until they get rid of the voids between the links. Further, the metal is subjected to blacksmithing until the workpiece is given the necessary shape and strength.