How to Wind a Fishing Line onto a Trimmer Reel: Ways to Winding And Video 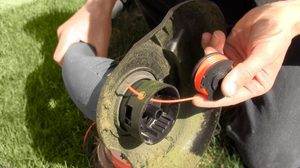 Any garden owner knows how quickly weeds can flood the area. To defeat them without excessive efforts will help the trimmer. This incredibly useful device is an indispensable tool for trimming and mowing grass.

The trimmer mowing grass with a fishing line can be used near: houses and other buildings, fences and hedges, trees and shrubs, beds and flower beds, aisles in the garden.

Such a convenient, and most importantly, effective device, as a trimmer, exists in several variations:

As the names indicate, the types of trimmer are noticeably different from one another. But regardless of the type of tool, it the cutting element may be a fishing line. Of course, the line tucked into the reel of the trimmer is not infinite. And sooner or later it will be required to replace it with a new one.

The consumption of fishing line depends on on frequency of use device and scope of work performed. The more grass is cut and the more often it is trimmed with a trimmer, the more actively the line is consumed in it. And, accordingly, the faster it will end. In this regard, the question arises: how to fill the fishing line into the coil of the trimmer?

Not everyone knows the answer to this question. But winding fishing line on a reel plays an important role in the trimmer. In order for the device to function normally, it is very important to correctly wind a new line onto the reel. How to change the line on the trimmer, and will be discussed in this article.

Besides the usual type, there are others, having sharp edges. Usually they are made with an “asterisk” or “square”. The presence of sharp edges is the main feature and key difference of these threads.

In addition to the types of woods already mentioned, there are also interesting and common varieties. Especially among them can be noted fishing lines, inside of which stretched metal wire. Threads of this type are often used in tools that run on gasoline and have an engine more powerful than one and a half horsepower.

When choosing a fishing line by thickness there is one “but”. It is important not only to evaluate the capabilities of the material, but also to take into account the features of the trimmer. Necessary look in the user manual, which is attached to the tool and find information about the requirements for the cutting element.

Using the wrong thread may cause the tool to malfunction. Using a thread that is too thick will overload the motor of the device. And the use of too thin thread at times will increase the wear of the twisting mechanism.

How to wind a line onto a trim reel

To learn how to refill a fishing line with a trimmer, read this guide. The step-by-step instruction below takes into account the features of the coils of different types of trimmers, therefore applicable to any instrument.

The right amount of fishing line is cut off. Now you need to carefully inspect the bobbin, in order to understand what type it belongs to. It depends on how the line is to be wound on it.

To visually study the process described above, you can turn to the Internet for help. The popular YouTube portal has many differents with a demonstration of winding fishing line on a trimmer reel.