The simplicity of the Stihl MS 180 household chainsaw device allows its owner to eliminate most of the tool malfunctions with his own hands. To successfully repair a model, first of all, you need to determine the causes of the breakdown. The repair algorithm is different in each case and depends on the type of malfunction.

The Stihl MS 180 household chainsaw is equipped with a high-quality branded internal combustion engine, from the manufacturing plant configured to work in difficult weather conditions. The single-cylinder engine of the model successfully withstands long-term high loads without increasing the amount of fuel consumed, and the forged piston group does not lend itself to corrosion and burr formation. Cooling of the engine. Improved by means of intake air masses. For more convenient operation, the Stihl 180 chainsaw is equipped with a factory vibration suppression system, and to reduce noise during operation. A proprietary silencer.

The tool clutch includes a proprietary drive sprocket. It can withstand prolonged loads and does not slip with a sharp increase in speed. This increases the efficiency of the Stihl chain saw when cutting dry thick logs. 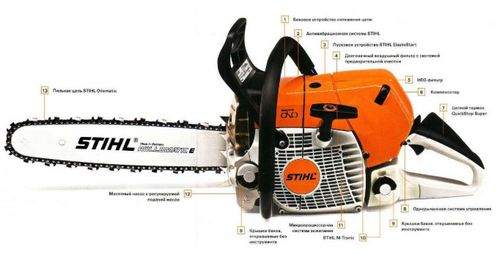 The working bodies of the garden tool are a reinforced metal tire on which the chain is stretched. For more precise adjustment of the saw headset tension, the Stihl model has a proprietary frontal device. Shields for the front and rear arms, as well as a chain catcher, are responsible for protecting the operator from a broken chain. To lubricate the saw headset, the model device has a proprietary Ematic lubrication system with a long-life oil pump. In addition, the manufacturer has included a spike bumper in the garden tool set for more accurate sawing of logs.

The Stihl MS 180 chainsaw stands out for its ease of use, which was achieved thanks to the manufacturer’s thoughtful arrangement of controls. The engine start button, throttle lever, factory plastic starter grip and OEM choke position switch are located at the rear of the model. A built-in inertia brake lever is installed at the front.

What to do if pouring a candle on a Stihl 180 chainsaw?

If the tool is used frequently, one of its fuel lines may be cut off, causing fuel to spill onto the spark plug and other saw parts.

If the fuel pipe breaks or a hole forms in it, the owner of the tool will need to remove the damaged hose and replace it with a new one. In this case, the junction of the new hose with the factory fitting must be carefully treated with a sealant.

READ  Replacing a Gas Cable on a Chainsaw

In some cases, a filter clogged with dirt is unable to pass enough fuel mixture through it. Accordingly, a fuel shortage arises in the system, which leads to the fact that when you press the gas of the chainsaw, the fuel burns out, and the new one does not have time to enter, as a result of which the Stihl chainsaw stalls. Also, with a clogged fuel filter, there may be a noticeable drop in the power of the chainsaw at maximum speed, but this is with insignificant contamination.

Another common reason a saw can stall when revving up is air leaking into the carburetor. It is possible to check this only with a special tool, but it is worth noting that if preventive work with the carburetor has not been carried out for a long time, then a new set of gaskets can be installed in the carburetor. In some cases, this helps to solve the problem with its depressurization.

READ  How to Fuel a Stihl Lawnmower

It’s easy to make sure the air filter is dirty. You just need to remove it and start the chainsaw without it. If the saw is working normally, then it’s in it and it just needs to be changed or washed, depending on its type. And do not be afraid that the chainsaw will work for a while without dust protection. If there is no dust cloud around you, then everything is fine.

So, remove the air filter. To do this, you need to remove the cover from the rear upper part of the chainsaw, which is fastened either with screws, or simply with some kind of latch that you just need to turn or snap off.

If the saw operates normally when the filter is removed after starting up, then it is dirty.

The air filter is either felt or nylon. The first looks like cotton wool or synthetic winterizer, and the second looks like a fine mesh of nylon threads stretched over a plastic case. Felt needs to be changed to a new one, but nylon can be simply washed in soapy water, dried and put back in place.

Low oil in the fuel mixture

Let’s look at the most unpleasant case first. Why? Because before manipulating the filters, it is better to make sure that your oil and gasoline are mixed in the correct ratio.

Here, however, it is worth noting that if your saw has already been started many times (for example, ten times), but it continues to start, and then stalls again when the speed increases, then everything is apparently in order with the fuel. Otherwise, she would have simply stopped starting altogether.

READ  How to Sharpen an Emery Chainsaw Chain

But still, I recommend immediately dispelling the slightest doubts about the quality of the fuel, as soon as your saw stalled during a set of revolutions for the first time. Because if the reason is in the fuel, then, as already mentioned above, you can get into an expensive repair. Otherwise, you can still do it. To dispel doubts is to drain the old fuel from the tank and fill in fresh fuel, in which oil and gasoline are mixed in the correct proportion.

The correct ratio is best seen in the instructions for the saw. If you have lost it, then we look at the ratio on the oil package. It is usually 1:50 or 1:40. If the oil is used “non-native” (well, for example, for Stihl chainsaws, Stihl will also not be enough “native”), then I recommend using a ratio of 1:40, even if the oil packaging says 1:50.

After preparing a new mixture, drain the previous mixture from the tank, in which we are unsure, and fill in the fresh one just prepared.

Now that you have done everything to dispel any doubts about the quality of the fuel, we move on to further actions.

As I wrote above, with a lack of oil on the piston and cylinder walls, scuffs can form. And they almost always form. If you are lucky and there are no seizures, then with the new fuel mixture prepared in the correct ratio, the chainsaw should start working normally.

If seizures have appeared, then the saw may start and stall several more times, after which it will stop starting altogether. In such a situation, I sympathize with you, because, most likely, now you will need to replace the piston group, which will be very expensive.

If the saw, as before, starts up and stalls at high speeds, then we manipulate the filters.

If the option with an air filter did not suit you, then we try to change the fuel one. It is located in the gas tank and is attached to a hose through which fuel is taken from the tank.

This hose must be gently pryed with something and removed from the gas tank its edge, on which the filter is fixed. Here, the option with work without a filter, as in the case of an air filter, is better not to apply, since you cannot know for sure if there are any unnecessary impurities in the fuel.