The light and compact model of the tool is used for domestic purposes, but despite the optimized performance, the Stihl chainsaw sometimes does not start. The problems are manifested in the fact that the engine turns on and stalls, works unstably, cannot develop the required power or unexpectedly gains high speed. 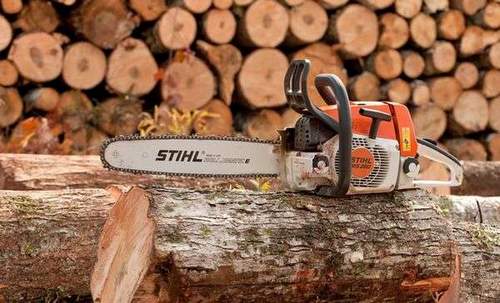 Why the Stihl chainsaw won’t start

For a preliminary diagnosis of the causes, the operation of the gas pump, the appearance of the spark plug, fuel intake, carburetor functionality and filter condition are checked. Pay attention to the performance of cylinders, pistons, muffler, crankshaft bearings. After preventive measures, they try to start a chainsaw. Inadequate lubrication of rubbing parts also becomes a factor in poor performance.

Spark test on spark plug. The functioning of an element is influenced by various factors. When testing the mechanism, the causes are identified:

Due to the work in such conditions, deposits accumulate on the contacts of the candle. Subsequent corrosion of the conductors causes no spark in half of the faults. This is because the gap between the modular contacts changes. To test the sparks, do the following:

Malfunction of the ignition coil

The module or coil is not disassembled, its suitability is difficult to identify without testing devices. Modern ignition systems are durable, lightweight and small in size. They are characterized by almost failure-free functionality. Chainsaw malfunctions due to the ignition coil can be fixed by yourself.

Test the outlet wires for damage (including internal) that occurs due to vibration leading to friction. If no cracks are found, then the ignition coil needs to be replaced. Sometimes a malfunction of the module is indicated by a faint, barely noticeable flash when the saw is heated. This is due to an increase in coil temperature, which leads to an increase in transistor resistance.

The peculiarity is that at the beginning of the work a spark can appear, but after prolonged use it becomes dull and disappears. Modern ignition coils in the home workshop are not repaired, therefore they are replaced with suitable elements.

After twisting the candle on its surface, a wet coating is detected. This indicates an excessive supply of gasoline to the combustion chamber. For this reason, the tool does not work or stalls, because the fuel does not ignite.

Another inhibitory factor is clogging of the breather, a small hole in the cap of the gas tank. It is cleaned with a needle, otherwise the Stihl MS 180 chainsaw will not start. To determine the wrong fuel supply, carry out sequential actions:

If the tool starts and immediately stalls, then the fuel line is tested further. Check the gasoline filter, the surge from the crankcase, the integrity of the septum in the pump when unscrewing the cover.

With bearing defects, a slight play is felt. To identify it, the flywheel of the Stihl MS 180 saw is shaken from one side to the other. The movement indicates that the flywheel is shifted towards the electrodes by its own magnets, as a result of which there is no spark. To remove the mechanism, remove the cutting element, remove the filter cover and clutch. For the crankshaft stopper, remove the manual starter cover and tighten two bolts.

The clutch is unscrewed using a key clockwise. Remove the drum with an asterisk, change the old clutch and spin it all the way. Lock the crankshaft so as not to break the starter. The mechanism is going in the reverse order. To tighten, the brake lever is tilted forward, the tool is turned on, then removed from the brake.

Rarely, bearings with defective bearings are detected (the diameter of the holes in the cage is increased). To determine, disassemble and measure using a micrometer. A broken knock indicates broken bearings. In this case, urgent repair is required, because if the integrity of the crankshaft is violated, the piston group and cylinder will fail.

In this case, the spark is not able to ignite the fuel, which in large quantities enters the furnace for burning a combustible mixture. If the candle is filled, then the carburetor is defective or the cold engine does not start correctly. The engine is purged, the procedure is performed with the ignition turned off and far from an open flame. To ensure ignition of the fuel at the time of start-up, clean the mechanism:

If the tool turns off immediately after start-up, it means that some device or part has broken. To determine the cause, they test the mechanism on their own or in service workshops. Sometimes the reason that the mechanism starts up poorly is the incorrect maintenance of the saw:

Sawing units are idling, but the chainsaw stalls when gas is pressed, because the load increases. The tool is heated before use, driving the engine at idle for a minute. If this is neglected, the motor stops after pressing the pedal. Other reasons may include:

The low octane number of the fuel causes the brake, because this circumstance does not allow the motor to achieve the required power with increasing load.

Violation of the functionality of the fuel assembly system leads to air leaks. In this case, the unit stalls at idle and does not hold their number. An additional suction reduces the air pulse to the fuel pump and passes through the membrane of the sump or crankshaft oil seals. Diagnostics is done with a vacuum gauge.

Cessation of engine cold operation occurs for other reasons:

The seals are checked by pouring gasoline into the crankcase, the leak is visible visually. This means that the engine does not work at idle, and at high frequency, leaky seals will cause the bearings to seize. In case of leakage of elements they are replaced with new ones and sealing is carried out.

Sometimes the engine stalls after normal operation. To establish the cause, pay attention to related circumstances:

Many systems of the mechanism are involved in the launch, so the loss of revolutions of the Stihl chainsaw after idling can be a consequence of various factors. Confident idling and interruptions in the engine under load can occur for the following reasons:

If the tool does not develop revolutions, then the conductivity of the hole in the fuel tank cap is broken. The occurrence of vacuum does not provide the required amount of fuel, because the engine does not gain the required power. Turnovers are reduced with the accumulation of carbon monoxide in the muffler, and it is difficult to remove gases from combustion.

Does not slow down

The tool quickly reaches its maximum speed and power does not decrease. This situation is explained by the fact that:

The power tool is operated according to the manufacturer’s instructions. Only after checking the chain tension does the unit start up. At the same time, the filling of the tanks with a combustible mixture and oil is controlled, the device is securely fixed in your hands. If, when all the rules are followed, the mechanism refuses to work, then the Stihl chainsaw is repaired.

How to start a Stihl chainsaw: instructions

The tool manufacturer took all measures and developed a manual, thanks to which the mechanism starts conveniently. The user will protect himself from injuries if he performs the proposed frequency of actions:

Before commissioning, tool maintenance is performed. In order for the idle adjustment to be effective, they do the following:

To adjust the mechanism at idle, the appropriate adjusting screw is used. Its rotation depends on the required setting:

It will not be possible to adjust idle operation if there is air leakage into the engine through a gasket, acceleration pump, oil seals or for another reason.

Gasoline engines are equipped with an ignition system that ignites the fuel. The time the flash occurs affects the operation of the motor. With mass production in the factory, the ignition adjustment of the chainsaw is not done. On the corresponding rotating elements, labels are set, which, when configured, are combined. Incorrect adjustment leads to the fact that the mechanism starts and stalls.

If the cables are undamaged, then check the ignition coil. This is done with a special tester to ring the device. In this case, the indicators on the device must coincide with the technical characteristics of the coil, which are prescribed in the instructions for use. If discrepancies are detected, the ignition unit is changed to a workable device.

The coil may become unusable due to vibration when the tool falls or hits, so work carefully.

To begin with, the compression is measured, if it is not there, then the reason lies in the breakdown of the piston group.

The required pressure in the cylinder should be 8 atm, if it is lower, then the cylinder and piston, rings, crankshaft bearings may have worn out.

To find out the state of the piston system, you need to completely disassemble the saw and remove all the main components of the mechanism:

Rings with bearings inspect, identify defects. Replacement can be carried out independently, which will require repair skills, or take the tool to a specialized workshop. Assembly is done in reverse order.