What Lubricant To Use For The Gearbox Angle Grinder

Lubricants produced with such characteristics are quite expensive. There are imported, less expensive lubricants on the Russian market.

Each tool manufacturer, be it Bosch, Makita, Hitachi, DeWalt, Metabo, RedVerg, Interskol, E256, LEPSE, recommends its own lubricants. This is the manufacturer’s policy. They insist that the lubricants specified in the instructions are used when performing maintenance. Over, non-compliance with these recommendations does not allow performing warranty repairs.

Angle grinders (angle grinder), popularly called angle grinders, are widespread among lovers of tinkering. With their help, the home craftsman can not only perform grinding work, but also cut metal, plastic, stone. Angle grinders are produced by various manufacturers, including domestic ones.

The angle grinder is a reliable tool that can work, with proper operation and timely replacement of lubricants and carbon brushes, for a long time.

The right lubricant for your angle grinder not only extends tool life, but also improves performance.

Knowing the rules for choosing a lubricant for an angle grinder or making it with your own hands, you can perform maintenance without contacting service.

Lubricants of domestic manufacturers for bearings and gearboxes of grinders

With the rise in for foreign lubricants, lubricants from domestic manufacturers have become especially in demand.

Russian lubricant manufacturers have learned how to produce high-quality lubricants suitable for any tool.

Lubricants have been developed for reducers of grinders, perforators, and drills.

The most popular products are Nanotech Metal Plack Electra. The range of lubricants produced by this company allows you to select the lubricant required for each unit

Overview of lubricants for angle grinders

Earlier it was said that there are many types of lubricants from both a foreign manufacturer and a domestic one. A good lubricant for power tool gearboxes is available from Bosh. It is called “Gear Lubricant” and is packaged in tubes of 65 grams. One such tube is enough for several servicing of the angle grinder. 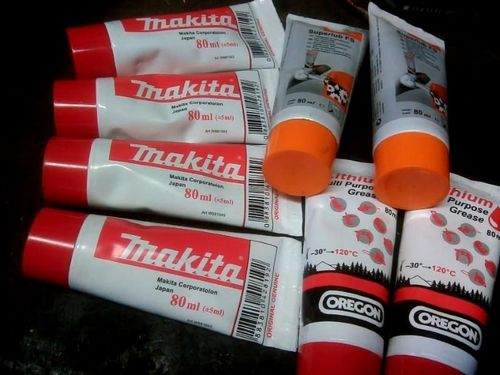 Of the lubricants intended for the gearbox of the angle grinder, produced by a domestic manufacturer, we can recommend the products of Nanotech. It is called “Nanotech MetalPlak Electra” and is intended for tools that work with intense load. And also from domestic lubricants, SHRUS or Tsiatim-221 are widely used, however, they require preliminary preparation and, in fact, are a homemade lubricant.

Checking the correct lubrication of the gearbox angle grinder

The last step in servicing your angle grinder is to check that the lubricant is correctly applied and distributed inside the gearbox. To do this, after the gear unit is assembled, the power tool is turned on without load for several minutes, while ensuring that there are no extraneous sounds, odors, and other things. If they occur, you must immediately disconnect the angle grinder from the mains. The heating of the gear unit is also checked. The lubricant must distribute heat evenly and the temperature of the gear unit must not be too high.

After a short work, unscrew 4 screws, then remove the cover from the gearbox. Visually inspect the helical gears for grease. If it is absent, then too little lubricant has been loaded and should be reported. If in the process of work it squeezes out of the cracks, then it is too much laid and the excess should be removed. After making any changes, check the operation of the angle grinder again without load.

How to properly remove old grease in an angle grinder

The disassembled angle grinder gearbox must be well cleaned of old lubricant. It no longer fulfills its functions, plus solid particles have already accumulated in it, resulting from wear of moving parts. Mixing with new, old lubricant also significantly degrades its performance. Therefore, the gearbox and gears must be thoroughly cleaned.

Remove old grease with a rag, paper towel, or just a rag. The removed parts can also be washed in gasoline or thinner. The washed parts must be thoroughly dried before assembly. Residual solvent or gasoline will mix with the new grease and change its consistency, which will again impair its performance.

When to change the lubricant in your angle grinder

The timing of the next grease change depends on the load and the intensity of use of the angle grinder. It is usually equal to 12 months. With everyday use, an angle grinder with frequent overheating, the frequency of change is significantly reduced, at least to six months.

To make sure it is necessary to add a new amount of grease, the gearbox must be disassembled by unscrewing the screws on its cover. Inside is a pair of helical gears. The small one is placed on the anchor and is used to drive the large one located on the secondary shaft. A grinding or cutting disc is attached to this shaft.

In the process of operation, the lubricant, when the gearbox moves, scatters along the walls of the housing, drying out over time and forming large lumps. The material used for a long time overheats, becomes liquid and flows out of the housing. Therefore, its volume in the gearbox decreases. If there is only a thin layer of lubricant on the gears, add lubricant.

What, how and when to lubricate the angle grinder

In angle grinders (angle grinder), commonly called angle grinders, the main load falls on the gear reducer changing the rotation axis. Care for it is required throughout the entire period of operation, since the mechanism needs to reduce friction between its interacting parts, timely maintenance. The use of lubricant for the gearbox of the angle grinder allows not only to minimize the destructive frictional effect, but also helps to cool the tool.

Removing used grease is the first step in gearbox maintenance. It is necessary to remove the old layer for several reasons:

Removal of waste is carried out using disposable paper towels, rags or a piece of tissue at hand. The removed parts of the gearbox should be thoroughly washed in solvent or gasoline, and dried before installation. Residues from cleaning materials can also mix with the new grease and change its consistency, resulting in poor performance.