How to Charge a Makita Screwdriver Battery

All screwdrivers that operate on battery power are quite reliable and durable devices in their design. At the same time, the “weakest point” of such a tool is usually the battery itself, which without proper care very quickly loses its characteristics and becomes unsuitable for use. It is no secret that all branded lithium and Ni-Cd batteries are quite expensive, and their price can sometimes reach 30-50% of the cost of the tool itself. Naturally, all owners of the tool have a question about how to restore a screwdriver battery or repair it? Is it possible to somehow, at least partially, restore the capacity of the battery? In this lesson we will try to answer all your questions!

Design specificity of a screwdriver battery

In principle, it doesn’t matter which screwdriver you have. Hitachi, Bosch, Makita or DeWolt. The batteries of all these tools have many similarities and do not differ much from each other. Each battery used for such a tool can be one of three types: cadmium nickel, lithium-ion, manganese nickel, and the first two of the listed types are the most common. If you disassemble the battery of a screwdriver, then it will be a set of individual elements connected in series into one battery. All these elements are located inside a common housing, on which the power terminals are output, which are also used to charge the battery. 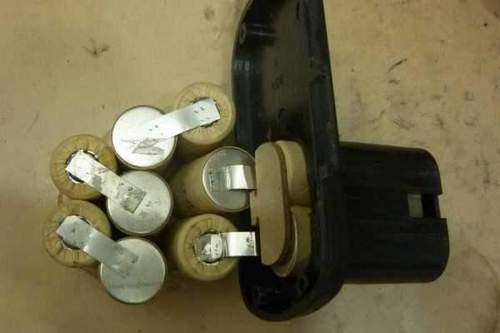 Depending on whether the lithium or nickel-cadmium type of battery, all its elements will have a certain operating voltage, the value of which depends on the materials of which the battery is made. In addition, the battery capacity, which is very important for the long-term operation of a screwdriver without recharging, will depend on the type and, of course, size. As you know, the battery capacity is measured in A / h (mA / h) and is always indicated on the surface of the device. Therefore, by carefully opening the battery case, first of all, it is required to determine the type of elements of which it consists. The fact is that during battery repair it is impossible to replace Li Ion batteries with ni cd, since the first ones have an operating voltage of 3.6 V, and the second one has 1.2 V. The methods for restoring their working capacity and ability to repair plan.

It is important to keep in mind that most batteries, in addition to the main power contacts, have two more terminals, which are contacts for protection against overcharging and overheating in the case of a powerful charger. Charging current is supplied to these terminals via a thermistor that automatically disconnects the circuit after the battery is fully charged. You can learn more about the internal structure of the battery from the for the lesson.

How to detect a faulty battery?

As already mentioned, all elements inside the case are connected in series and externally practically do not differ from each other. Therefore, the main task that always arises before the master is to determine the link that has lost its capacity. The fact is that the overall performance and battery capabilities will be equally affected by the performance of each of the batteries. In this case, the battery performance will significantly deteriorate even if at least one element from which it is assembled loses its capacity. It is important to remember that at the same time all these elements cannot lose their working capacity, in principle, it is therefore important to accurately determine the “weakest links” and replace them with new or at least workable used cells from another battery of the same type. After that, the performance of the entire battery will be almost completely restored, if you do not take into account a slight loss of capacity due to the depreciation of all elements as a whole.

Using a multimeter to test the battery

Before checking the voltage, the battery must be recharged for several hours in order to provide it with a full charge cycle. After charging, the voltage of all elements should be at least 1.2 V for nickel-cadmium and 3.6 for lithium-ion. Then the whole battery is connected to the load and its full discharge is carried out, after which again it is necessary to measure the voltage of each element. At this point, in fact, unsuitable “banks” are determined, the voltage of which has dropped below 0.5-0.7 V. After replacing them, the battery is assembled in the reverse order and the screwdriver is ready for further operation.

In fact, this method is almost similar to that described above, however, it allows you to do without a multimeter. Instead, you need to prepare a light bulb designed for a voltage of 3-4 V or a small electric motor. This method allows you to determine the health of each battery element without measuring the voltage.

So, as in the previous case, the assembled battery is fully charged. After that, it is disassembled and a load is connected to each “bank” in turn (or simultaneously to all, but then it is necessary to have several identical bulbs). After some time, workable elements will continue to supply current to the light bulb (or rotate the micromotor shaft), and those that lose capacity will quickly be discharged. Unsuitable “banks” are evaporated and, instead of them, they are soldered into the operable chain, after which all the elements are inserted back into the case.

To begin with, we note that not all batteries have recovery options. The easiest way to restore the battery type Ni Cd, which is equipped with the vast majority of the tool today. True, today you can find a Makita or hitachi screwdriver that runs on a lithium battery, but there are still few such models. It must be recalled that before making claims on the battery, you always need to check the operability of the charger, which externally may seem quite suitable for operation, but do not provide the required charging current.

So, what is the easiest way to restore the elements of a Ni Cd battery. The first common method of restoring battery cells is to erase the so-called memory effect, which is very easily determined when the battery is connected to the load. The screwdriver first works for a while, but the battery runs out quickly. Then, after standing for some time without recharging, the battery continues to work again, and this can continue several times in a row. In order to get rid of such an unpleasant effect to some extent, the battery must be fully charged in the nominal mode (current must be equal to one tenth of the battery capacity) and gently discharge through a small load for a long time. As a result of this action, it turns out to draw all the plates of the battery cells. The load in this case can be a light bulb with a power of 40-60 W, designed for a voltage of 220 V. After a complete discharge, the battery must be charged again and the process repeated at least 4-5 times. Ultimately, you can restore up to 70-80% of the original battery capacity.

Another effective way to restore the performance of nickel-cadmium batteries is to add electrolyte. During operation, the electrolyte gradually evaporates. This happens quickly enough when a large load is connected to the battery, and the screwdriver is such. To fill the “jar” again with electrolyte, a hole with a diameter of 0.8-1 mm is carefully drilled in it and a couple of drops (or cubic centimeters) of distilled (possibly boiled) water are poured in with a medical syringe and a needle. Then the holes are filled with a drop of epoxy. It must be remembered that a bank filled with electrolyte will regain its capabilities only after a few charge / discharge cycles. To do this, it is recommended to separately “drive it out” and only then solder it into the battery.

Finally, the easiest way is to banally replace a failed element. It can be carried out by almost anyone who has ever used a soldering iron and a screwdriver. There’s no need to fix anything here, just determine the unsuitable elements and solder the workable ones instead.

The process of replacing and restoring battery cells is well outlined in the in this lesson. However, let’s look at a few more useful tips that will help extend the life of the battery:

As you can see, there are several ways to restore a screwdriver’s battery, you just need to correctly determine the cause of the malfunction. However, observing the battery operating rules set forth in the instructions, you can significantly extend its life.