How to Count Chainsaw Chain Links

At first glance, all chains for the chainsaw are the same, but in reality this is not so. In addition to their perimeter and chain lengths, they can also vary in the shape of the cutting edges of the tooth. It is about the elements of the chain links, about their possible variations that we will discuss in this article. In addition, we will try to answer the question of which chain is preferable to choose depending on the proposed work.

Description of chain links of a chainsaw (saw)

The cutting chain link of the chainsaw consists of: the base of the link (1), the tooth blade (2), the depth gauge (3). The tooth blade has a vertically located end blade (4) and a falling upper blade (5) that slopes horizontally backward. 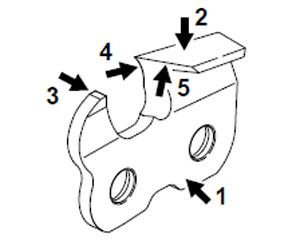 Fig 1 Parts of the cutting link

To achieve optimal cutting properties, certain angles are attached to the tooth blades. The tooth back that slopes at an angle back forms the posterior angle of the upper blade. This angle is needed for cutting the upper blade into the wood.

The tapering back of the tooth blade forms the posterior angle of the end blade. This angle is needed for side cutting chips.

The edge of the end blade forms a rake angle with the sliding surface of the cutting link. The front angles of different types of chains vary from 60 to 85 °.

The rake angle, the angle of sharpening and the angle of the upper blade change when sharpening. These angles have a decisive influence on the cutting ability of the chain. Be sure to follow the prescribed values.

This angle is measured relative to the sliding plane of the cutting link and, depending on the type of saw chain, has a value from 50 ° to 60 °. The upper blade is the main blade, and the rear corner of the upper blade. This is the most important angle. The rear corner of the upper blade is difficult to measure, its correct value is formed subject to other prescribed values. The grinding angle or the angle in the plan is obtained by measuring from the upper cutting edge at a right angle to the guide rail.

The angle of sharpening can be changed, depending on the application. We will talk about this later. Now we just say that the angle is 10 or 30 degrees. On each cutting link in front of the tooth blade there is a depth limiter. The height difference between the top edge of the depth gauge and the front edge of the tooth back is defined as the distance of the depth gauge.

Now let’s talk about what influences and what to look for when choosing a chain, knowing what types of work you have to do. Let’s start with the sharpening angle (Fig. 6). So the larger the grinding angle, the higher the cutting performance. When cutting dry wood, it is better to choose an angle of 30 degrees, which will add productivity and will not affect the smoothness of cutting and excessive loads on the saw. If you will work with raw wood or with frozen wood, then the chain should be chosen with a small angle of sharpening, that is, 10 degrees.Also, such chains are used for longitudinal cutting of wood, that is, along the log. Usually they work for a long time, but with low productivity. The same can be said about the rake angle (Fig. 4) At a lower angle, the performance will be higher, but the chain will also blunt faster. Well, the last, for granted, is the appropriate chain length. So the chain should fit under the tire so as not to sag and so that it can be put on it. If the chain of the saw is so stretched that it can no longer be pulled without sagging, then the chain (s) can be removed from the chain, which will adjust its size to the required.