Why is the lock nut tightening?

The angle grinder, depending on the brand and diameter of the working disk, develops from 6,000 to 12,000 revolutions per minute. When the rotating disk sharply touches the surface to be treated, the following rapid processes occur.

The cutting disc, cutting into the material, experiences great resistance and slows down somewhat, but the rotor of the electric motor rotates for a few more moments by inertia at the same speed and literally twists the spindle thread into the lock nut, pressing it into the cutting wheel. Now it will not be easy to unscrew it, especially with a native key. 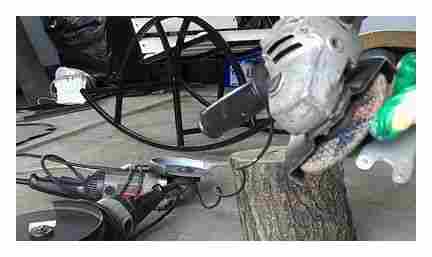 There are various ways to get rid of this defect. Not all of them pass without leaving a trace for the instrument. Here we will consider one of them, which can be called auto thermal.

Various mechanisms make our work easier, both in production and in domestic conditions. But sometimes they bring unexpected and not very pleasant “surprises”. After all, it is impossible to foresee all the situations in which you will have to use the tools.

This also applies to an angle grinder (an angle grinder. an angle grinder), when the cutting disc is clamped on it so strongly that it is impossible to unscrew the clamping nut with a standard wrench or other tools or methods. In this case, there is a risk of breakage of the quick clamping button of the disk and even the body of the tool, usually made of aluminum alloy. The matter is further complicated by the fact that the surface against which the working disk is pressed is often round and it is impossible to stop it.

So, if there is no way with the key, even if you insert it and hit it slightly with a hammer, then we begin to use something more serious.

The first thing to try, but again without fanaticism, is to take a rod, insert it into the holes on the nut and, using a hammer, move the nut in the direction of its untwisting. The main thing here is not to break the button and not to rip the holes, as here

The second thing that many advise is to warm the nut. We warm up the nut. As a result, it is slightly, but physically still obliged to expand. Resizing may or may not help.

Do not pull all the way until the scroll hold button stopper or the button itself bursts. In this case, it is not the tool with which you unscrew it that breaks, but often the case of the angle grinder.

The third method is the most effective, and, oddly enough, one of the safest for the angle grinder itself.
We take and break off the edges of the disk along the nut.

Next, we use a thin metal plate or another disc (thinner), and maybe a second angle grinder with a disc. In this case, a broken disc must be turned either with a plate or a disc. We try to sharpen the disc so as not to damage the nuts holding this disc, because they will still be useful to us. So we sharpen the whole broken circle until we grind it off and the nut is unscrewed.

This business is 4-5 minutes, no more.

If you will be using a second disc or metal plate, it is best to insert them in a vise to hold them. Since it is dangerous to hold such objects with your hands. This method is the most effective.!

With a hammer drill in jackhammer mode

The hammer drill must be switched to the chiseling mode without rotation. A 6 mm drill must be placed on the end of the flange or rest against the edge of the hole. The task is to unscrew the nut, to move it from its place. After that, unscrew it with your hands or with a key. During work, you need to block the rotation of the spindle.

How to fix disc clamp on an angle grinder

To implement this method, you will need some kind of massive wooden material: a piece of thick board, a piece of timber or just a stump.

Then we take an angle grinder with a tightly clamped disc, turn on the tool and press the fixing nut against the surface of the stump with sufficient force so that it continuously rubbed against the wooden surface.

How to loosen angle grinder disk that is stuck. (jammed)

The process must be continued for two to three minutes. This time is quite enough for the clamping nut not only to heat up, but to glow hot. If heating is not stopped in time, there is a risk of damage to the spindle bearing due to overheating.

The degree of sufficiency of the thermal effect on the fixing nut can be checked with a pipette filled with water: drops from it instantly evaporate, barely reaching its surface.

Then we proceed in the standard way. Press the button for quick disk replacement and unscrew the nut with a standard wrench without any effort. In this case, the well-known property of the metal helps us to expand when heated.

The nut can be unscrewed absolutely effortlessly.

Before unscrewing the nut on the angle grinder, you will have to completely crumble the disc. If it is already destroyed, you can break it with your hands. Solid circles can be sawn with a hacksaw or a metal blade. The inner metal ring and pieces that do not lend themselves to mechanical stress should remain from the abrasive wheel. Then you need to clamp a metal profile or any unnecessary plate in a vice, the thickness of which is less than or equal to the thickness of the disc (but not more). Then switch on the angle grinder and grind off the remaining abrasive to the seat sleeve. After that, the flange can be easily unscrewed with the universal angle grinder wrench.

You can take care in advance so that the tool does not get caught in the angle grinder:

With open-end wrench and socket head

Grind the working surface of the 17 key to 4 mm in thickness. On the surface of the 24 mm socket, grind 4 protrusions so that they fall into the holes of the flange.

The open-end wrench must be placed under the disc. Put the socket head on the nut of the angle grinder and turn it with a ratchet in the direction of rotation of the wheel.

A jammed nut: how to unscrew a disc on an angle grinder?

The angle grinder is a multifunctional but capricious tool that does not tolerate haste and negligence. Breakdowns and breakdowns are the result of careless handling or safety violations. And the most common problem when working with an angle grinder is jamming of the abrasive tool between the support flange and the clamping nut. How to unscrew a disc on an angle grinder without damaging parts and the tool itself?

In this case, the existing standard tools will have to be slightly modified. a 17 mm open-end wrench and a 24 mm socket. The key thickness is grinded down to 4 mm. 4 protrusions are machined on the head, falling into the holes of the fixing nut.

After preparation, the key is placed in the space under the disc, and the head is put on the flange of the angle grinder and rotated in the direction opposite to the rotation of the wheel. After that, you can easily remove it and put a new one.

This method is similar to the previous one, only you can use a suitable metal rod or chisel. After fixing the spindle head, tap on the edges of the clamping holes in the direction of the wheel movement. Slightly moving the lock from a dead center, you can unscrew it by hand. However, the method is not the most harmless for the tool. the mounting holes for a standard key are damaged.

When working with an angle grinder, it is important to remember that this tool has an increased risk of injury. Accordingly, it is impossible to lose vigilance in any case, even when disconnected from the mains. When using auxiliary tools and materials to replace the disc, be careful with them as well. Locksmith tools can also cause perceptible injury.

It would seem that there is nothing difficult in replacing the disk with a new one. Nevertheless, at this stage, the master is faced with a problem. the nozzle is tightly clamped with a fixing nut that does not want to twist off. How to remove a jammed disc from an angle grinder? What methods are used for this? What tools can be used if the original key is lost? You will learn how to remove a clamped disc from an angle grinder in this article.

For the best understanding, let’s take a look at the main types of angle grinder discs and define their application:

What causes the problem?

It is difficult to face this problem when spinning at idle speed. Especially when working with light wheels and tools with soft start function. However, after an increase in revolutions and contact with the cut surface, the following occurs:

That’s it, the process of tightening the fixing flange is completed. an abnormal situation is obvious. Its occurrence is influenced by the following factors:

In this case, it can be very difficult to remove the disc from the angle grinder. Additional measures need to be taken.

Replacing a disk in normal mode

Regularly operating an angle grinder, you need to constantly change the wheels, which are a consumable. If the tool is already inconvenient to work, then the worn out abrasive wheel should be replaced.

Important! Be sure to check the disconnection from the mains to avoid personal injury.

Nut jammed. how to unscrew?

Removing the disc on an angle grinder, if bitten, is not so easy, especially without damaging the cutting element or tool. We will also consider several options for action.

What is the cause of the malfunction?

Before wondering how to remove a disc from an angle grinder, experts recommend figuring out why a nut bites on an angle grinder. It is noticed that this problem is mainly observed in angle grinders, which have a significant disk size. A disc over 18 cm is considered large. During operation, a torque is generated. Further, when the master starts cutting, a small bump occurs. In other words, a force is exerted on the disk. If the size of the nozzle is not more than 12 cm, then this effect will be negligible. If the disc is large, then the nut is tightened by inertia more. As a result, it is not possible to dismantle it in the usual way. For more information on how to remove a disc from an angle grinder, see below.