Angle grinders (angle grinder), popularly called angle grinders, are widely used among tinkering enthusiasts. With their help, the home master can not only perform grinding work, but also cut metal, plastic, stone. Angle grinders are produced by various manufacturers, including domestic ones.

Angle grinder is a reliable tool that can work, with proper operation and timely replacement of grease and carbon brushes, for a long time.

The right lubricant for the angle grinder not only extends the life of the tool, but also improves performance.

Knowing the rules for choosing grease for an angle grinder or making it yourself, you can perform maintenance without contacting service.

In angle grinders, the main unit subjected to the greatest loads during operation is a gearbox consisting of helical gears.

The rotational moment created by the rotor of the angle grinder is transmitted from the rotor to the working tool through a small helical gear to a large helical gear. Properly selected gear lubricant significantly reduces friction and heating temperature.

Bearings are used in the grinder, which also requires periodic lubrication. This is especially true for the spindle bearing of a large helical gear.

Such a grease is suitable that meets not only the listed requirements, but also environmentally friendly.

Lubricants for an angle grinder must have certain characteristics and must have the required consistency in properties.

Grease for gearbox angle grinder must have:

Grease for an angle grinder should not have mechanical impurities, be resistant to corrosion, hold firmly on lubricated parts, do not melt at high temperatures, prevent the formation of scoring at the contact points of parts and, of course, have water repellent properties.

In any angle grinder of any company, two types of sliding bearings are used: bearings for an electric motor and thrust bearings for a gearbox. 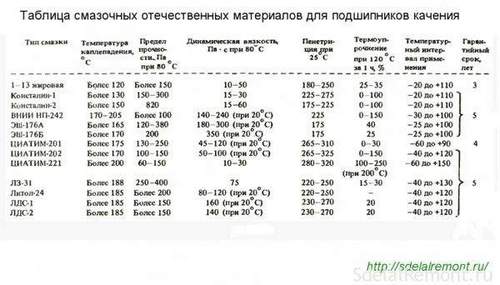 Foreign manufacturers of tools, including an angle grinder, recommend specially developed ointments as lubricants for grinders.

Lubricants manufactured with these characteristics are quite expensive. On the Russian market there are imported, less expensive lubricants.

Each tool manufacturer, be it Bosch, Makita, Hitachi, DeWalt, Metabo, RedVerg, Interskol, E256, LEPSE, recommends its lubricants. This is a manufacturer policy. They insist that the lubricants specified in the instructions be used during maintenance. Over, non-compliance with these recommendations does not allow warranty repairs.

Gearbox grease Makita angle grinder is available in tubes. Its high cost is commensurate with high quality and long life.

Lubricants of domestic manufacturers for bearings and gears of grinders

With the growth of for foreign lubricants, lubricants of domestic producers became especially demanded.

Russian manufacturers of lubricants have learned to produce high-quality lubricants suitable for any tool.

Lubricants have been developed for reducers of grinders, rotary hammers, drills.

Nanotech Metal Plac Electra products are especially popular. The range of lubricants produced by this company allows you to choose the right lubricant for each unit

The angle grinder uses bearings already filled with grease. But from improper use, overheating of the tool grease leaks.

How to choose the right lubricant for bearings angle grinder?

The grease for motor bearings must have protective properties that prevent the ingress of dirt, dust and moisture onto the bearing parts.

A wide range of foreign lubricants for bearings operating under different conditions is presented on the Russian market. But their cost makes us look for cheaper, not inferior in quality, domestic lubricants.

Possessing high water-repellent properties, they have a wide temperature range. The role of the thickener in them is played by organic and inorganic substances. For sealed bearings, it is best to use TsIATIM-203, VNIINP-242 lubricants.

Of pigment lubricants VNIIMP-246 blue grease and VNIINP-235 dark violet ointment were widely used for electric motor bearings. Due to the high price, the first grease is less common than the second.

In today’s Russian market, domestic manufacturers of lubricants are represented in a wide range of products.

Grease for gearbox angle grinder differs from grease for bearings the main feature. Increased adhesion. It should firmly adhere to the teeth of the gearbox with a large rotation.

In general, the process of lubricating the gearbox in angle grinders occurs due to the fine spraying of the lubricant and its suspensions. The gearbox works as if in oil mist. Therefore, the lubrication requirements for gearboxes are slightly different.

In addition to increased adhesion, lubricant for gearboxes must have high heat resistance and not melt at elevated temperatures.

Given domestic lubricants, although affordable, they are not always at hand.

And there is an affirmative answer to this question.

The basis of homemade grease for gearboxes should be a grease with high adhesion. It should hold firmly on contacting parts.

Grease for CV joints has increased adhesion. Shrus is a hinge in a front-wheel drive car operating in conditions of increased pollution, shock loads, temperature fluctuations and humidity.

Taking the lubricant for SHRUS as a basis, it is necessary to add a liquid lubricant (MS-20) to give the mass the desired consistency. Ms-20 oil must be served dropwise, thoroughly mixing the mass with a home-made mixer.

Good results are obtained with a mixture of a mixture of lubricant Tsiatim-221 and TAD-17, where the basis is Tsiatim.

Stuffing grease in the nodes of the angle grinder has its own rules. You need to know not only the order of its application, but also how much and where to put it.

When to change grease in an angle grinder

The lubrication of the angle grinder changes according to the maintenance plan of the tool when replacing failed gear parts or rotor bearings.

Old grease has a dirty dark color. This is due to the ingress of foreign particles of metal or dust.

How to remove old grease in an angle grinder

Old grease is always removed completely regardless of its color. The parts should not have traces of old grease, but in the cavities of the particle housing of the destroyed parts.

To remove old grease, you can use various flushing fluids used by motorists to wash the motor and its parts. At home, it is recommended to use kerosene or a solution of kerosene and gasoline.

All parts and their cavities must be thoroughly washed and dried.

The new grease is thoroughly mixed before application and applied with a thin layer. The bearings are lubricated by packing. If the grease is in a plastic tube, then the neck of the tube is attached to the side bearing cage and squeezed out before it flows out of the back side.

If the amount of grease in the bearings is controlled by leaking it from the back, then a certain amount of grease is packed into the gear of the angle grinder. Excess grease will leak during operation. And its small number will not ensure high-quality operation of the gearbox.

Leave as much lubricant in the gearbox as needed to cover the gear teeth.

For reference, apply so much grease so that it occupies a little less than half the volume of the cavity of the gearbox.

Checking the correct application of lubricant to the gearbox angle grinder

The control of the volume of grease stuffed into the gearbox is carried out by trial inclusion of the assembled angle grinder for a short time at idle.

If the gearbox began to heat up, traces of leakage of grease appear from the seals and gaskets, then the conclusion is clear. You shifted the grease. Open gear housing and remove excess grease. All excess grease will be placed on the gearbox housing covers. The insufficient amount of lubricant in the gearbox is determined by the increased noise of the gearbox.

During prolonged operation, the angle grinder lubricates the gearbox on the walls of the housing and loses its properties from external influences.

Having opened the gearbox cover, carefully inspect the condition of the lubricant, gear tooth profile. If you can, check the contact patch of the gears.

The presence of particles of dry or dried grease in the area of ​​the gearbox or on the housing indicates that the time for changing the grease has come.