Despite the simplicity of the design of the chainsaw, in case of interruptions in its operation, and sometimes with a complete failure of the unit, it is quite difficult to find the cause of the problem. Of course, an experienced master will be able to immediately determine what led to this or that failure. But an ordinary user, in order to find a chainsaw malfunction and do it yourself, will need to study the symptoms that are inherent in a particular breakdown.

The engine is the main unit of the chainsaw, and most of the breakdowns that occur in it are associated with a gasoline drive. Correct diagnostics can determine the causes and remedies even for an untrained user.

The main problems with starting the engine can be the following:

Malfunction of the ignition system

First of all, the reason that the chainsaw does not start should be sought in the ignition system of the unit. You need to start with checking candles, since there is a possibility that the spark disappeared.

According to the state of the twisted out candle, you can determine how the fuel system works. The candle is twisted with a special key. 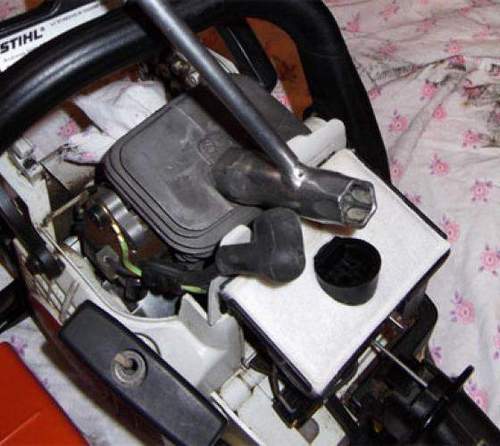 The following figure shows 3 options for the condition of the spark plug.

Fuel splashed candle speaks of its excess in the cylinder. If the candle is poured, then most likely the carburetor is incorrectly adjusted, or the rules for starting the engine have been violated. The candle must be wiped well and dried. Also, dry the combustion chamber:

A large amount of soot on a candle caused by the wrong ratio between oil and gasoline during the preparation of the fuel mixture, as well as malfunctions in the fuel supply system. If the mixture is prepared correctly, using high-quality oil, then the carburetor should be adjusted. A candle with carbon must be cleaned by washing in gasoline. After that, it needs to be wiped dry, with a needle to remove the remains of burning and to clean the electrodes with fine sandpaper.

You should also check the candle for the correct gap between the electrodes. Normally, the clearance of the candle should be in the range from 0.5 to 0.65 mm.

If dry candle, it is required to check for a spark on its electrodes in order to eliminate a malfunction in the ignition system.

If there is a spark, then the problem must be sought in the fuel system. No spark. The cause may lie in the candle itself (needs to be replaced) or the ignition system. The absence of a spark can cause a damaged cable, which should be checked by “ringing” the tester. With a good wire, you need to move on. Check the ignition module. A malfunction of the ignition coil or an incorrectly set gap between it and the magnet can also cause the fact that the spark disappeared.

Ignition on a chainsaw is simple: a permanent magnet is fixed to the engine shaft. A coil is fixed near it under a certain gap. When the magnet rotates, an electric current is generated in the coil, which is supplied to the electrodes of the candle. In the next photo, the arrow shows in which place correct clearance between coil and magnet.

The gap between these parts should be 0.2-0.4 mm. The walls of an ordinary plastic bottle have such thickness, and a template (probe) can be made of it by cutting off a small strip.

The clearance is set as follows:

If the chainsaw starts up poorly and the ignition system is OK, then check the entire fuel system of the unit. First of all, required adjust the fuel supply into the engine cylinder through the carburetor, setting it correctly.

Next, you need to observe how the chainsaw behaves.

Compression is checked by a compressor that is screwed into the cylinder instead of the spark plug. Next, you need to pull on the starter and observe the readings of the device. Normally, a new chainsaw shows compression ranging from 8 to 12 atmospheres. Below 8 atmospheres, the engine will not work.

Compression may disappear due to scratches on the inside of the cylinder and on the side of the piston. In this case, it is necessary to change the entire piston group.

In addition to problems with the engine, a chainsaw may have problems in operation due to a malfunction of the cutting (sawing) assembly consisting of an oil pump, a tire and a saw chain.

No oil enters the tire

Usually, if oil does not enter the chain of the chainsaw, it is necessary to check the channels through which the oil is supplied to the tire and clean them of contaminants. If the previous steps did not find the cause of the problem, you will have to check the oil pump. To do this, you need:

If the thread on it is worn, the shaft does not rotate, the pump does not work, the chain is not lubricated. The worn gear needs to be replaced. You can also pull out the oil pump itself and manually try to pump oil through it. If it does not pump, replace the pump.

Remember to remove the oil filter from the tank and clean it if necessary.

Also, a lack of lubrication may be due to cause her leak. You should check how tightly connected the pipes coming from the oil pump are. If the tightness is broken, the tubes are replaced with new ones.

The chain is breaking

If the chain broke during the operation of the chainsaw, then this could happen if it fell on a solid object, for example, on a nail. If the chain is constantly breaking, then the reasons may be as follows.

You can also learn about the causes of frequent open circuits from this.

The chain is not spinning

This nuisance often haunts inexperienced chainsaw owners. They forget after starting the engine remove the brake. As a result, the chain does not spin, the brake system overheats, and the clutch mechanism fails. The problem is solved by removing the saw from the brake. If the clutch does not “burn out”, you will notice chain rotation. Otherwise, clutch replacement is required.

The chain is dull quickly

The chain does not stop

If during operation with a chainsaw you notice that the saw chain does not stop at the right time, then this breakdown can have 2 options.

This happens when the drive or driven sprocket wears out. The chain usually begins to wedge under load. But without load, the saw can rotate. The photo below shows a worn out chainsaw sprocket.

The following photo shows that the reason why the chain wedges must be sought at the location of the driven sprocket.

But what if the chainsaw is completely jammed and all attempts to pull the starter to no avail? Such a malfunction is sometimes found on Chinese-made chainsaws. It is caused by bolts that have been loosened by vibration, which screw the engine to the plastic casing of the unit. These bolts are located directly under the flywheel (magneto). In the photo below, the arrows show the location of the problem bolts.

Twisting, they begin to rub on the flywheel and can completely jam the chainsaw. The following photo shows a flywheel with existing scuffs from bolts.

To eliminate the malfunction, you will need to remove the flywheel from the motor shaft and tighten the bolts.

This problem may occur if the chain is dull or improperly sharpened. This, to a greater extent, applies to new chainsaws. But if tire is worn out, then even after replacing the chain you will notice that the saw leads away. Tire wear can be easily determined if you put it on a flat table and attach a square to it, as shown in the following photo.

In this case, you can see that there is a gap of about 2 mm between the tire and the corner. It is because of this one-sided tire wear that the chainsaw is sawing crookedly. The problem is solved only by replacing the tire with a new one.

Important: in order to extend the service life of the chainsaw tire, it is necessary to remove and turn it over from time to time. Due to this, the tire will wear out more evenly and will not cause chain skew.

Why is a chainsaw heated

The new chainsaw is warming up because all the details of the piston group have not yet been rubbed. Therefore, the unit must be run-in during which the engine must not be allowed to overheat. If the unit is already run-in, then overheating of the engine may cause late ignition, of course, provided that the combustible mixture was prepared without violating the proportions. To fix the problem, you need to adjust the ignition system of the device.

Why is oil flowing

Many chainsaw owners are faced with a problem such as oil leakage from under the unit. Most often, oil flows due to damage to the oil hose connected to the oil pump. The photo below shows exactly the case when the end of the hose is torn and does not fit tightly on the pump nozzle.

But to get to this place, you will need to remove the clutch mechanism from the shaft. In some chainsaw models, oil may leak out at the junction of the oil pump with the oil tank hose (indicated by arrow in the photo).

To eliminate the leakage of lubricant, you will need to pull this hose from the place of landing. To do this, you can use pliers by pulling on its outer part. At the end of the hose you will see rubber stopper, which is the cause of oil leakage. This cork needs to be wiped well to remove the remaining oil, after which its seat needs to be sealed with something. You can use car sealant or fum tape, as shown in the following photo.

Next, insert the hose into the hole, reinstall the plug and seal it using a flat screwdriver. On this, the operation to eliminate oil leakage can be considered completed.