Hello! Today we will repair the battery of the screwdriver. Do you know that the history of the creation of a screwdriver goes back to the Middle Ages. even in the 15th century, when the knights put on armor before the battle, and the squire helped them twist the pieces of armor guess what? A screwdriver!

This went on for a long time until in 1907, Canadian inventor Peter Robertson patented the Robertson screw with a standard square hole in which a screwdriver blade was inserted. Since that time, the screws began to be produced on an industrial scale and used in the household. Later, in 1934, the inventor Henry Phillips finalized the screw cap and a screw with a cross notch appeared, into which the corresponding screwdriver was inserted. By that time, the engine had already been invented and the idea of ​​creating a “rotator of screws and screws” was in the air. However, there were big problems with the batteries. their weight and dimensions. It was possible to solve the problem only in the 1980s, when the first nickel-cadmium Ni-Cd and lithium-ion Li-Ion rechargeable batteries appeared.

The production of household and professional cordless drills and screwdrivers was the first to be mastered by the USA and Japan. All this happened due to the appearance of new energy-intensive batteries of electricity. Just we will change them urgently inside the Interskol DA-10 / 10.8 ER cordless drill / driver that came into my hands. The malfunction was like that. when the button was pressed, the engine simply did not spin, but the LED turned on, truth shone weakly.

Let’s start repairing the battery of a screwdriver. We remove the battery from the screwdriver handle and unscrew the three screws that are located under the sticker below. 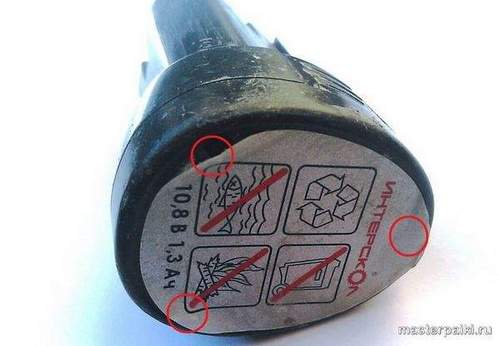 After twisting the screws, gently push back the latches of the latches, as in the photo. And remove the bottom of the plastic battery case.

Inside we see lithium-ion banks Chinese company HighStar model ISR18650-1300 Li-Ion. This means that the batteries have never changed. Because it is known that Interskol is purchased by batteries from this company and inserts them into almost all of its cordless tools.

The photo below shows the interior of the screwdriver’s battery in all its glory with the banks in the amount of three pieces, which were produced already in 2011. These batteries lasted five years with active use at a construction site. So the result is very decent. Usually they die earlier, probably in the cold they were not exploited.

To replace the battery banks, you need to take it apart even more. I advise you to remember the location of the plus, minus and charging contacts so as not to mix up the wires during reassembly.

Pay attention to the voltage control board on the batteries. especially on it, stabilizers and protective diodes fail. It is absolutely necessary to ring suspicious radio elements on this board with a multimeter.

We check the voltage at the output of the battery. it turned out 4.4 volts, but it should be 3.7 x 3 = 11.1 volts normal and 10.8 volts with a minimum battery charge. In general, the banks are dead. they need to be changed unambiguously.

We continue to disassemble the battery of the Interskol screwdriver

This can be done in several ways. you can solder the wires that go to the board.

You can also simply remove the contacts from the top cover of the batteries. The photo shows what shape the curved contacts have, so you can easily remove them yourself.

Under the plastic cover we see how the batteries are interconnected. Them spot welded. This solution is used in almost any battery of another tool. This is a reliable and gentle battery connection. At the same time, destructive heating of lithium batteries themselves is minimal.

Gently peel off or bite off the metal tape with pliers to disconnect the cans from each other. From the side of the board they were also joined together by tape and put on glue on a cardboard pad. This is done so as not to short circuit anything on the board. You must not forget to put it back in place when reassembling the battery.

Pay particular attention to the condition of the wires inside the battery. They may be broken or frayed. They need to be properly isolated or replaced with fresh ones. Since I was repairing the battery of a screwdriver on the road in the field, I had to apply the ingenious invention of the engineering mind. He took out a blue electrical tape.

When disassembling the battery of the Interskol DA-10 / 10.8 ER screwdriver, I was pleasantly surprised. a thermal sensor was put in the budget screwdriver to control the temperature of the batteries. It turns out that when lithium cans are overheated, the protection circuit turns off the power until the temperature returns to normal. True, the owner never managed to drive him into such a regime. We carefully tear off this temperature sensor so as not to break it. then we will place it in the same place on new banks.

it is possible in different ways, for example with thick wires. I decided to solder the torn metal tape removed from the old cans. First, I tinned the tapes in places of future contacts from two sides. Then a well-heated soldering iron with a drop of solder tinned the battery contacts. But so that they did not get very hot. let them cool. Then he pressed the tape to the contacts of the cans and soldered the tape again without much overheating of the battery cans.

The hardest things to solder are the negative conclusions, but with a good flux, things are going very quickly. True, the flux is then better to wash for the cleanliness of the insides of the battery.

When assembling, do not forget to put the cardboard lining between the banks and the board in place. This is so that fresh soldering does not short circuit anything on the board.

On this, repair and restoration of the lithium-ion battery of the Interskol DA-10 / 10.8 ER screwdriver is completed. Almost all batteries are repaired in much the same way. popular manufacturers of screwdrivers: Bosch, Makita, DeWALT, Metabo, Hitachi, Elitech, Skil and my favorite Bison. This concludes my story about screwdriver battery repair. Ask questions in the comments. Better yet, in the appropriate thread on our forum, or write to the soldering master personally in the mail.